“Stress Reeliever 2” is a serious fisherman’s boat. It’s cold molded and was made by a company that started here in the 80’s named Gamefisherman. This particular boat was the first hull that was produced by Gamefisherman back when they were based in Costa Rica. This plus the other 7-8 hulls they made here, gave them a world wide reputation of raising fish and kicked off the now world famous Gamefisherman company. When Gamefisherman moved to Florida, they left behind the boat builders who now build the Maverick Yachts. This hull is famous for it’s sharp entry and zero dead rise which produce a super clean wake. It is also very light so it doesn’t sit deep in the water, again, producing a cleaner wake. More on why we like the wood boats below. 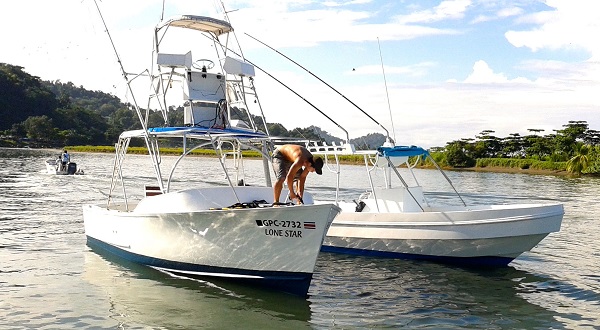 The Stress Reeliever 2 (the one on the left) is Cold Molded, which means it is made out of Wood and Epoxy. It’s a very similar concept to the fiberglass construction, where you have glass fibers and a polyester resin, but instead of glass fibers the strength comes from the wood grains. Wood grains weigh significantly less that glass fibers and are much stronger, resulting in a lighter, but stronger hull. The epoxy resin also has 50-60 times more adhesion strength than Polyester resin (and is 10 times more expensive) so when you use the lighter stronger wood fibers with high end epoxy you end up with a much better boat. But how does that relate to fishing?

Lighter boats put less strain on the motor, so the motor makes less noise. Wood also absorbs some of the motor noise (fiberglass transmits sound better). Due to construction, this boat weighs half of what a fiberglass boat in the same size weighs. Being lighter means it sits higher in the water, making less bubbles behind the boat as it trolls. Lighter boats also have less prop slippage, which again means less bubbles behind the boat. Less noise and less bubbles behind the boat helps us to where the fish don’t get spooked by the noise, and they can see the lures better. We think this helps. Does that mean fiberglass boats don’t catch fish, absolutely not and Junior on the 32 footer below sometimes catches more fish (because captain Junior is awesome), but we love this boat ??

It has a private bathroom for the ladies and full Furuno electronics. 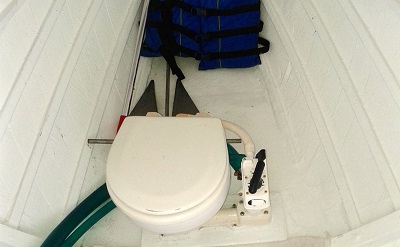 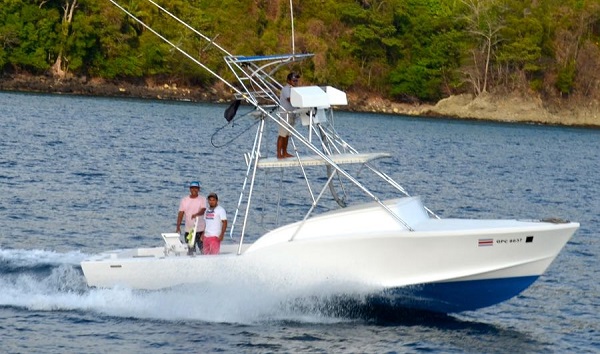 “Stress Reeliever” is an awesome, professionally rigged 32 foot Ocean Master completely rebuilt with weightless noise absorbing Corecell in March 2016 by owner John S. It is a quick and stealthy boat with a super enthusiastic crew which enjoys fishing as much or more than the customers!

All our boats have private clean bathrooms with flushing toilets! 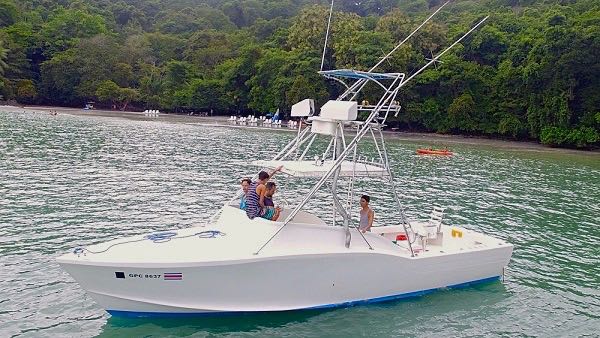 “Mucho Fisho” is our dedicated inshore boat, with Johnny doing over 300 days a year inshore! It is perfectly setup for roosterfish, but also handles the offshore trips very well and is the perfect way to get some sailfish or Marlin without breaking the bank. Captain Johnny is one of the only captains in Quepos that would much rather fish inshore than offshore, Roosterfish and Snapper are his passion, and when we went boat shopping he completely fell in love with this boat! It has super high sides for kids as well, and it’s long thin design are great for getting around inshore with plenty of space!

Boat has a private clean bathroom with a toilet and a door for the ladies! 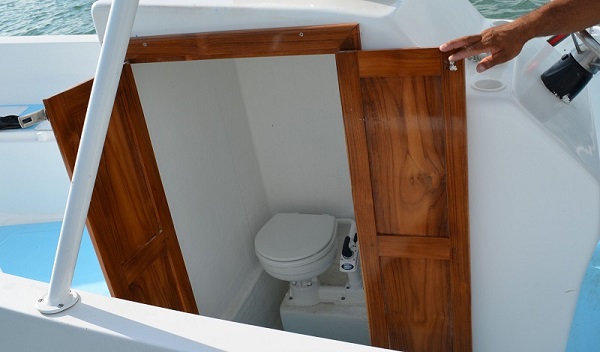 Built by owner John S and finished in November of 2015, this boat is built out of super light weight and sound absorbing Core Cell foam covered in a special lightweight fiberglass. This is one of the lightest boats in Costa Rica, and that allows us to get out to wherever the fish are hiding without spending too much fuel. Once we are there, this boat floats really high in the water making for a very clean wake to catch lots of billfish. In addition to floating really high in the water, the CoreCell this boat is built out of also absorbs most of the motor noise, making this a great boat for offshore trolling as well as inshore fishing! 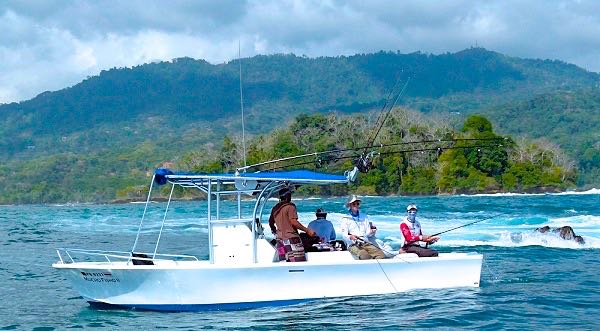 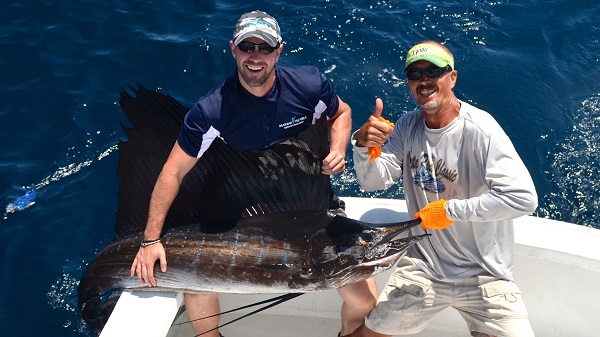 Growing up in rural Colorado, Capt John has been involved full time in fishing since he was 13, when he started making flies to sell for fly fisherman. Growing up an avid fly fisherman John fished every pond and river in Colorado until 20 years ago John discovered his true passion on a billfish trip out of Maui. He then decided that Offshore fishing on the fly and conventional tackle for billfish was going to be his calling in life, and started making regular trips to billfish hot spots around the world. Then in 2003, John decided to sell off everything and chase his dream. He bought a boat and truck and fished every town on the Pacific Coast, starting in Mexico and ending up in Quepos. When John arrived in Quepos, he knew he was home, and since 2003 has been a professional captain here in Quepos. This April John was invited to be a captain for the IGFA world billfish tournament, the superbowl of billfish tournaments, and out of 80 professional invited captains, John placed 5, making him a super experienced and very enthusiastic captain that will put you on the big one! John and our Gamefisherman are the perfect mix when looking for billfish, on their very first trip together, they hooked two 350+ pound Black Marlin! 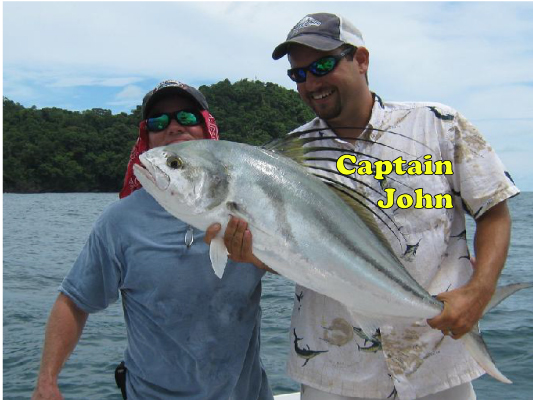 John S is the owner of Quepos Fish Adventure. Growing up in Louisiana and Texas, John is no stranger to the water or boats. From first sneaking out his fathers boat at age 14 to taking offshore excursiones in his friends dad’s hatteras off the coast of Louisiana, John has always loved boats and fishing! Finally making it to Costa Rica in September of 2007, he has been living the boating / fishing lovers dream! He bought a 32 foot custom made boat upon arriving to Costa Rica, and since 2008 has been the owner and captain of the 32 foot Ocean Master “Stress Reeliever”! In February 2013, John finally purchased his dream boat when he bought the cold molded Gamefisherman that we named the Stress Reeliever 2, and finished the restoration in November of 2014. John S has either built or completely rebuilt every boat in our fleet, optimizing them for stealth and economy. We have the most fuel efficient stealthy boats in Costa Rica. 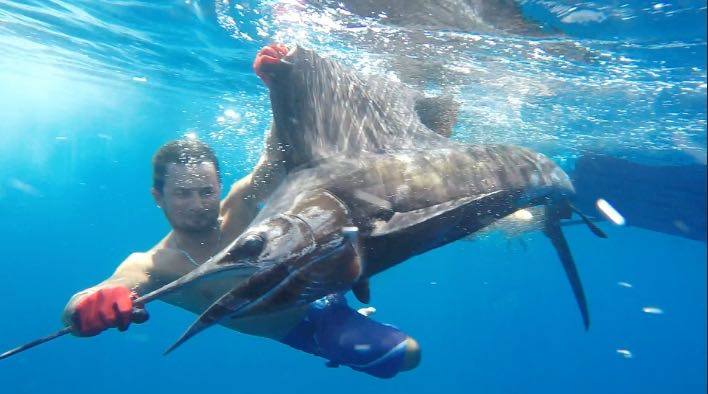 Mike is the mate for John W on the Stress Reeliever 2, and is the captain on the same boat on Fridays and Saturdays. Apart from having the coolest nickname from any captain in Quepos, Mike has experience. Mike has been with our company since 2008 and fishes at least 200 days a year. He has released over 10,000 sailfish and 600 Marlin, so he knows billfish! He got his nickname from being able to spot fish fast, usually before they even break the surface to go after a lure. His experience definitely shows when a fish comes in the spread, he is not only fast at spotting the fish, but usually has the fish hooked before anybody even knows the fish was back there. He is also related to many successful captains in Quepos and Los Suenos which means we always have the insider fishing reports! 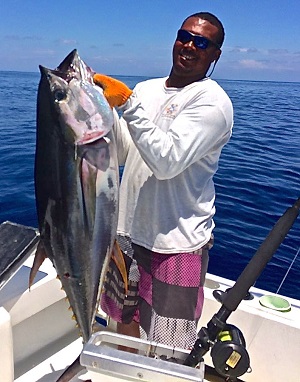 Capt Junior is a native English speaking captain, that might very well have the most charter trips under his belt of any Quepos captain. Formerly the head captain of Luna Tours back in the 2000’s, Junior has fished 250 days a year offshore for the last 15 years. He is also related to some of the best tournament captains in the area, and any boat he has ever fished is always successful. As soon as Luna Tours charters closed in 2015, owner John instantly put Junior on the payroll, and now Junior is the captain of our 32 foot Ocean Master correctly named the “Stress Reeliever 1”! 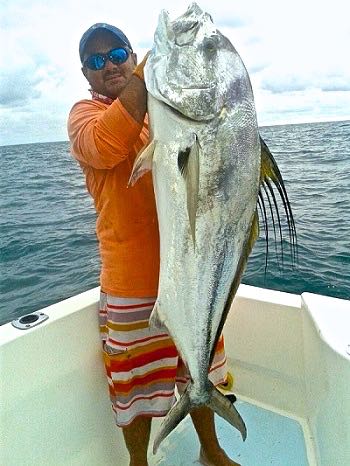 Captain Johnny has been fishing in Quepos his whole life. For the 8 years before he started with us, he was the captain of another 25 foot Apex similar to this one. On days that the boat he captained didn’t fish, Capt John would watch other companies fight over him to run their boats, and that is when John decided we had to have him! Since he was used to driving a 25 Apex, we bought a 28 Apex (the 28 has a private bathroom) and with a ton of new gear, Johnny is now the best option when looking to Roosterfish in Quepos! In addition to Roosterfish, Johnny also specializes in bottom fishing, he is one of the few inshore bottom fishermen here, and is great chasing down the billfish! He is a great addition to our team, and we are looking forward to some awesome, but low priced, fishing trips from him and our new Apex!

Reserve your date today with only $100! We accept Paypal!

Giving you the best fishing experience for your dollar, providing a top notch experience at both inshore and offshore fishing sportfishing in Costa Rica. We are based in the Manuel Anotnio and Quepos area of Puntarenas, Costa Rica. We are only a short 45 minute drive South of Los Suenos, Herradura and Jaco. We are only 30 minutes north of Dominical and Uvita, and it is only 20 minutes or 2 hours by car from San jose. Our main target species we sportfish for include Sailfish, Black Marlin, Blue Marlin, and Striped Marlin. Other fish we like to go after are Dorado, (aka dolphin, Mahi Mahi) yellowfin tuna, amberjack, snapper, and rooster fish (inshore).